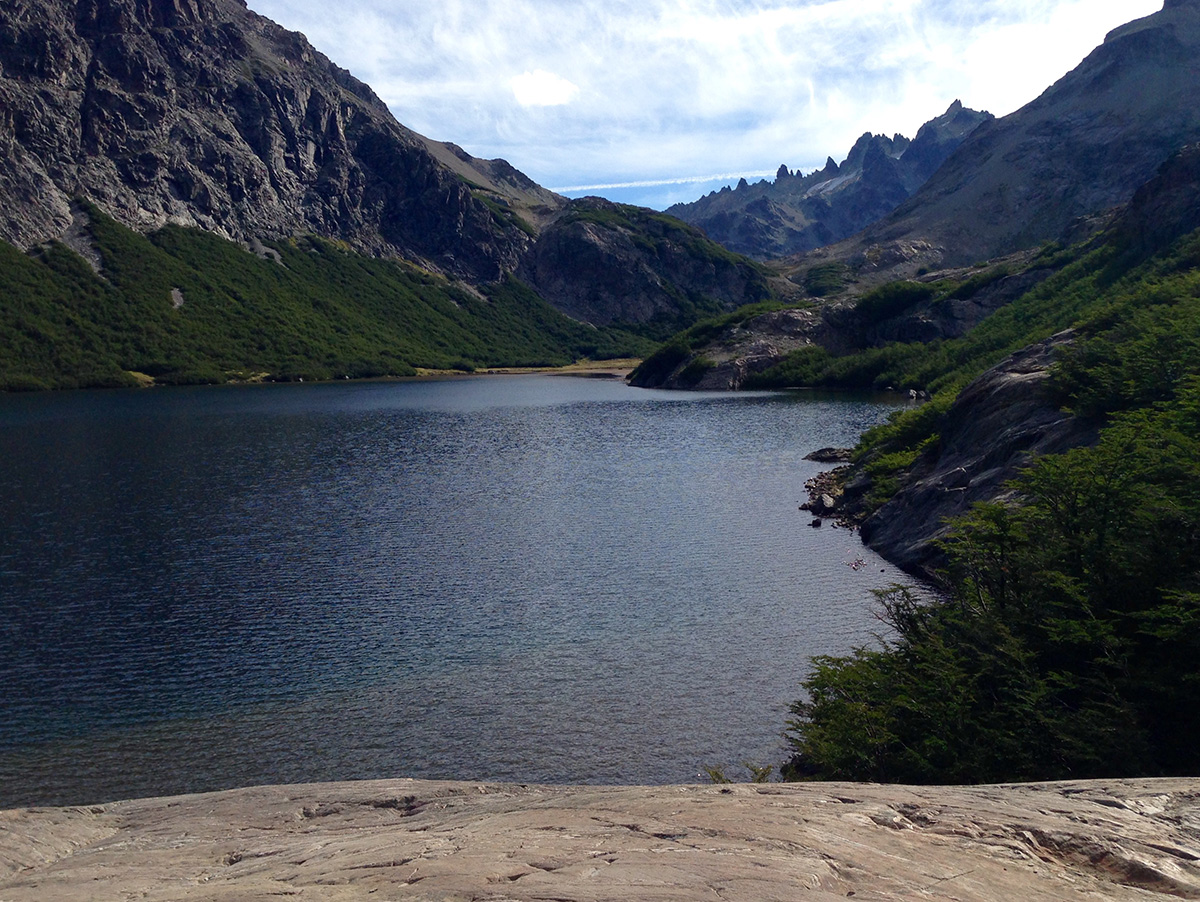 I met Core, a spunky, 22-year-old solo adventurer from Holland, one night in Pucón, Chile while out having a few beers with a group of people from my hostel. She told me she was heading to Bariloche, Argentina to do a multi-day trek. I told her that I also wanted to camp & hike.

Just like that, we became instant friends making plans together.

Core & I planned our 2 night/3 day trekking trip from Bariloche, Argentina in Northern Patagonia. We were so excited to start the hike through the spectacular, untouched nature. We made plans to follow the commonly done route, from the small town of Catedral to Colonia Suiza. A few minutes before we were set to leave on our trip, the owner of the hostel where we were staying, Javi, suggested that we go with him & 3 of his friends to do the trek in the opposite direction. We made the seemingly logical decision, changed all of our plans, & joined his group.

Preparing For The Climb

The first day was fun & relaxed. The six of us set out around noon for the 6 hour/18 km hike to Refugio Jakob. The last 1.5 hours were a steep and steady climb–so the quaint campsite at beautiful Laguna Jakob was a welcome sight for us all.

Core and I were excited and energized by our ability to survive in nature. We ended our night having fun drinking wine and chatting with the other campers. 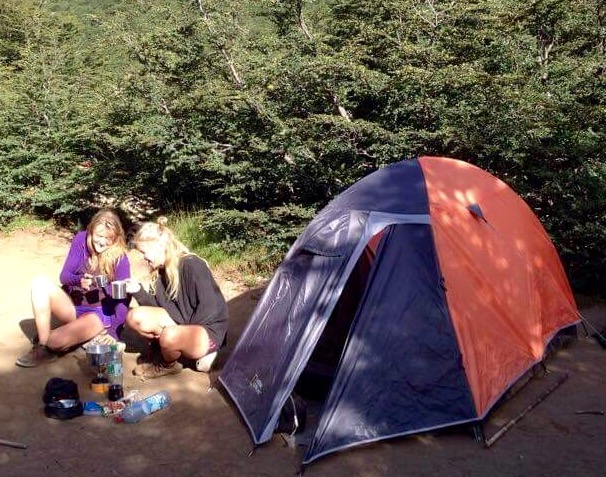 The Day of The Climb

The following morning, everyone in our group changed plans & dispersed in different directions. Now it was just Core and I. I had never done an unguided, multi-day trekking trip before, so this seemed adventurous, even for me.

I was intimidated by the idea of climbing up & over 2 steep mountains in 1 day & was upset that Javi was ditching us. He kissed us both on the cheek, wished us “buenas suertas,” & sent us on our way.

During the first of two big climbs on day two it was difficult to match Core’s natural enthusiasm. She seemed to be flying up the mountain–while I was sliding down as the rocks crumbled beneath my feet with each step.

It was my day to carry the tent & it was a cumbersome, awkward task. From several meters above, Core was yelling reminders to keep a positive attitude, but all I could think of was how steep and difficult the climb was–and how I didn’t think I could manage to hike a second mountain.

Finally, after 1.5 hours up, we reached the top of the first mountain! 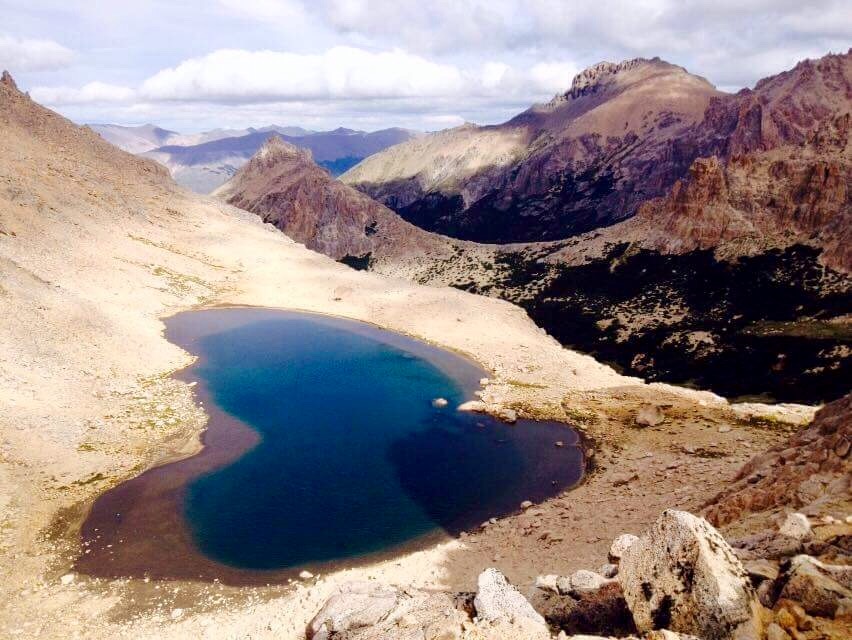 The second mountain looming in the distance was daunting, but I started to relax and enjoy the scenery as we made the peaceful walk down through the valley, snacking and chatting along the way.

Before we knew it, the second mountain was upon us.

Core seemed to be a natural climber, flying ahead of me and keeping her words and thoughts positive. We made a stop about halfway up.

That is when I realized that Core also had her doubts. “I am trying to find the courage & energy to continue,” she admitted.

That is also when we both realized that we were no longer seeing the painted red dots that marked the path. There was only one way to go, and it was straight up. 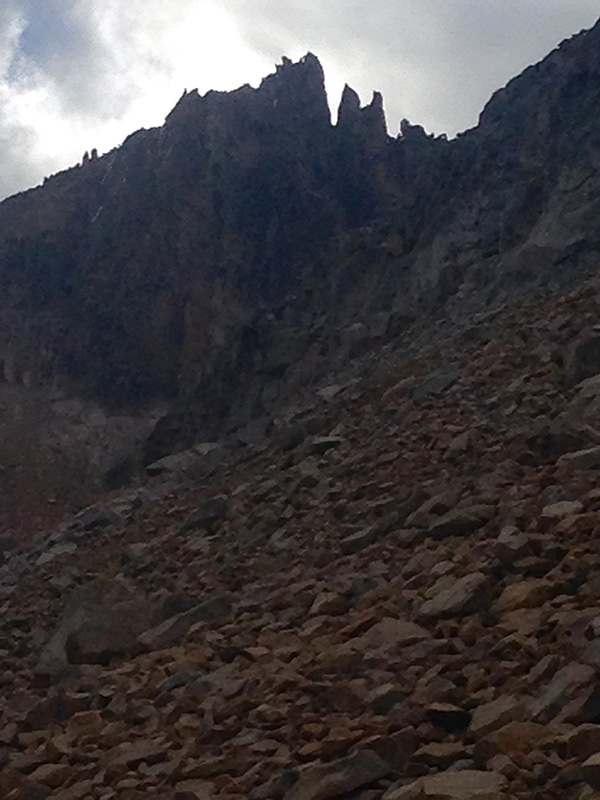 We had no choice but to continue.

We pressed on, Core easily taking the lead again. From below, I yelled “Core, there’s no way to go! It’s not safe! All of the rocks are sliding from under my feet.”

To which she responded with frustration, “the path is shit and I don’t know either but you have to choose the safest way! You have to keep going!”

I plopped down in the dust & rocks & slid a few feet down. I had to regain composure. There was no safe way. All I could think of was how devastated my mother would be if I didn’t make it back & how, if I did make it, I would never attempt anything like this again.

My knees, wrists, ankles and legs were covered with cuts and blood from many falls. At one point, a big rock came crashing down on my ankle and crushed it. I think I was lucky. At one point, Core slid about ten feet down.

Later, she admitted that she thought she would meet her end there. I think she was lucky. The distance to the top seemed to keep increasing. But after what felt like ages, I heard magic words. “I made it to the top and I can see the trail down!!”

Standing at the Top! 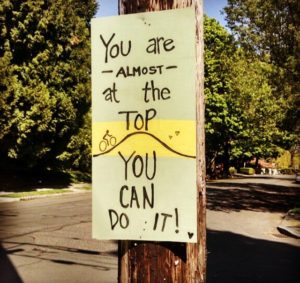 Standing at the top, we were high-fiving and hugging. I’m not one for curse words but, “Fuck, I can’t believe we made it. That was impossible!!”

“Not impossible,” she reminded me. “It was shit, but we did it. Don’t get comfortable, we still have a long way to go down…”

My gratitude that we were both survivors fueled my ability to fight the exhaustion & complete the 2 hour trek down to camp. We hardly spoke a word as we walked & reflected on the dangerous experience.

Thoroughly researching & understanding the trail before embarking on any hike, respecting Pachamama (Mother Nature) as a beautiful beast, being aware of physical limits, & relying on intuition over the advice of others- these are the lessons I learned on the side of the mountain. But even with all of the proper precautions & planning, we never know what challenges we might face on a difficult hike. Just as in life, all we can do is keep moving forward, one step at a time.